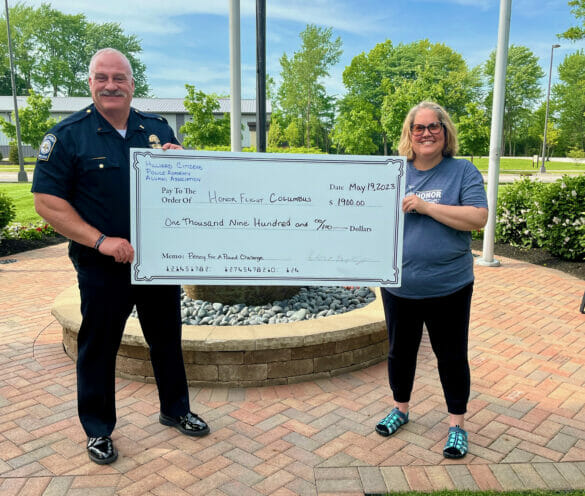 Posted May 26, 2022 in Police by Andrea Litchfield

More veterans will get to visit Washington, D.C., memorials thanks to a donation from the 2022 Penny For A Pound fundraiser.

Honor Flight Columbus is a nonprofit organization dedicated to honoring America’s veterans from WWII through the Vietnam War with a trip to Washington, D.C., to visit their service and war memorials. The organization, which is funded entirely by donations, has successfully flown 112 missions that totaled more than 8,000 veterans.

“This is an organization that means a lot to many of us,” Lt. Lightfoot said. “It’s a pleasure to give back to these veterans who have given so much to us.”

Penny For A Pound was started by City of Hilliard Division of Police officers in 2016 but has since grown to include Norwich Township firefighters and first responders from throughout Ohio.

The fundraiser works by having each participating police officer or firefighter perform a bench press, deadlift, squat, and overhead press. The individual gets four chances at each lift. The highest weight at each lift is combined for everyone’s total.

Donors are asked to sponsor one or more lifters. A suggested donation is one penny for each pound.

In the past, the event has benefited the Hilliard Food Pantry, Get Behind the Badge (which supports family members of fallen officers), Nationwide Children’s Hospital and Special Olympics Ohio.