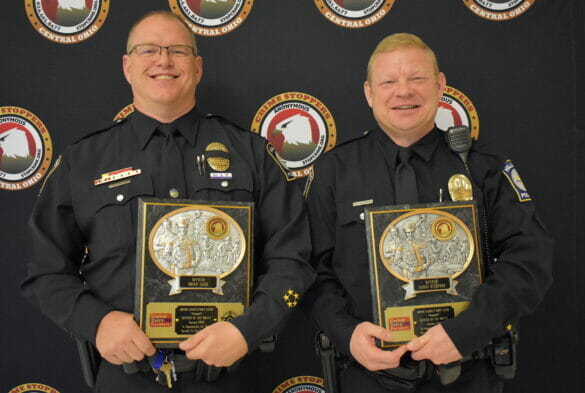 While the nation came together on Wednesday to recognize all law enforcement for “National Law Enforcement Appreciation Day,” two Hilliard police officers were singled out by one local organization.

Hilliard Division of Police Officers Brian Gano and Shane O’Connor were named the January Officers of the Month by Central Ohio Crime Stoppers. The officers were recognized for their work in safely capturing a man who was driving recklessly on the freeway’s closed construction lane.

The recognition took place in conjunction with the 10th annual Blessing of the Badge ceremony, in which public officials and local clergy gather to offer prayers for the safety of law enforcement officers during the coming year.

Officers Gano and O’Connor received a call during the morning hours on Oct. 9, 2018. Callers told police the man was driving through a construction zone on Interstate 270 near Hayden Run Road, and indicated he was going to jump off a bridge.

Both veteran members of the agency, Gano and O’Connor were dispatched to the scene. Upon arrival, the officers discovered the man was driving the wrong way on the closed lane of the interstate.

Realizing the severity of the situation, and knowing that if the driver were to drive into oncoming traffic there would be fatal results, Officer Gano used his cruiser to stop the man — diverting the car from three lanes of traffic and immobilizing the vehicle.

At that point, the man exited his vehicle and began to walk toward traffic. Officer O’Connor, who was directly behind Officer Gano, prevented the man from walking into the road. The man was later found to be suffering a mental health crisis, and was taken to a facility for treatment.

“I am proud of both of them” said Chief of Police Robert Fisher. “This is just one example of many things they each do to make our community a safe and better place to live.” 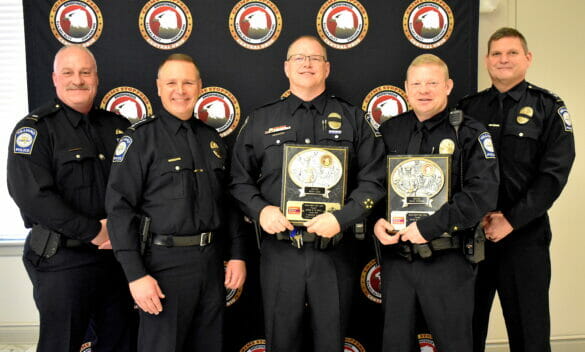