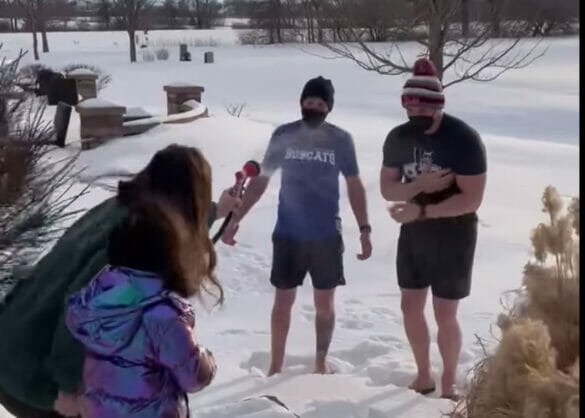 Two members of the Hilliard Division of Police found a way to be “freezin’ for a reason” as part of the Virtual Polar Plunge in support of the Special Olympics of Ohio.

Instead, the two took on the cool concept of getting sprayed with a water hose followed up by making some snow angels.

Still, he’s hoping residents will consider donating to the organization to show athletes “we’re still here rallying around them.”

“This year was unique due to Covid-19. The athletes haven’t been able to get together,” he said. “It’s more important this year than ever that we show support financially so that when they come back they’re able to play.”

The officers, who also serve as Special Olympics coaches during their off-duty hours, have raised nearly $1,500 for the organization with this year’s Virtual Plunge. The Hilliard Bobcats team in total has raised nearly $8,500 and are currently the sixth-ranked team statewide.

Money raised for the organization will go toward the purchase of uniforms, facility use, and sending athletes to various competitions.

To donate to the Hilliard Bobcats or sponsor an HPD officer, visit www.classy.org/team/333774.