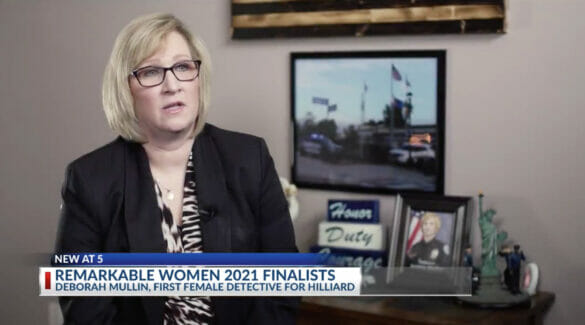 A longtime Hilliard Division of Police detective has been named a finalist for the NBC4 Remarkable Woman of Columbus Award.

She served as the Division’s primary family and personal crimes investigator before taking on the role of property manager in January 2021.

Mullin said her strength lies in listening and amplifying her victims’ messages.

“We’re the voice, and that’s what my goal is going to be. It will always be the voice for that child,” said Mullin. “I will go full-throttle for these victims, because it’s tough to come forward for something like that.”

Mullin was recognized as a “STAR” of law enforcement in 2018 at the Franklin County Law Enforcement Recognition Dinner. She was nominated for the STAR award by Hilliard Police Chief Robert Fisher.

Fisher said Mullin demonstrates a true compassion for the community.

“As our primary family and personal crimes investigator, she regularly provides emotional support to crime victims, helping them through the criminal justice process as her investigation progresses,” Fisher said. “Detective Mullin always displays a fantastic attitude and earns the respect of her co-workers and the community that she serves.”

Throughout March, which is Women’s History Month, NBC4 is highlighting the nominees. Mullin was nominated for the award by a neighbor.