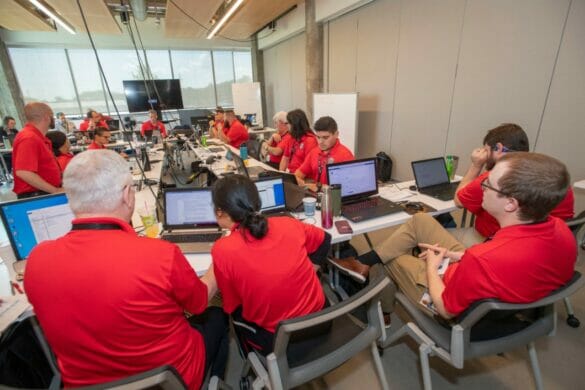 Maynard and Powell’s team for the pilot exercise was a volunteer civilian force under the command of the state’s adjutant general, Maj. Gen. John C. Harris Jr. The four-day exercise tested the Ohio Cyber Reserve’s capability to respond to a cyberattack on a government agency.

During the exercise, the participants were challenged by multiple simulated malicious attacks, such as an insider threat, criminal hacking, hacktivist activity, and an advanced persistent threat. The pace and complexity of malicious events were tailored to the team’s performance and achievement of its training objectives.

“Adam was a member of the Blue team (defender) and was responsible for identifying the type of attack and defending the agency,” Powell said. “The team was evaluated by members of the Army and Airforce Cyber Command, arguably the best cyber defenders our country has to offer.”

OP4 awarded three HERO awards to members who demonstrated the highest skills in cyber defense during the exercise. Maynard was one of three HEROS of the exercise, Powell said. The other recipients included the US Air Force and Cisco Systems.

Maynard and Powell brought back new resources and skills to Hilliard that will keep the community as safe as possible from cybersecurity attacks.