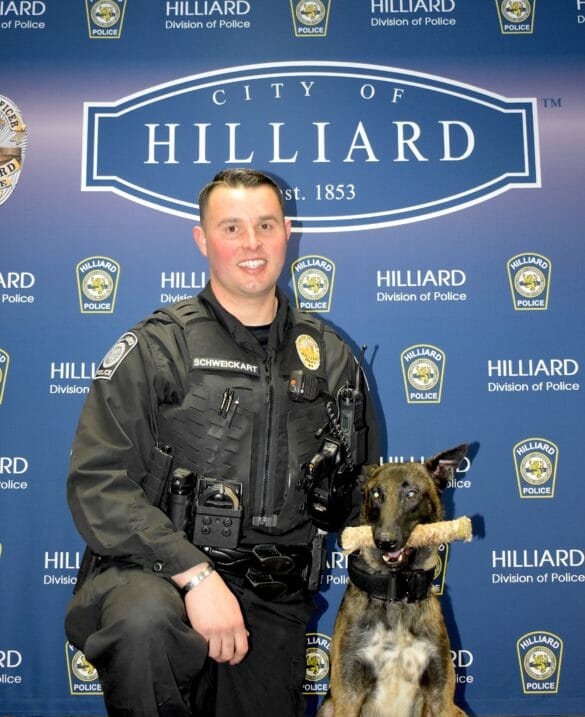 K9 Max, a 3-year-old a Belgian Malinois (pronounced Mal-en-Wah), has been on the job for about a month. He’s the seventh dog to serve since the agency’s K9 program was established in June 2005.

Like all agency dogs, K9 Max is considered a “dual purpose” dog, meaning he is trained in criminal apprehension, tracking, article searches and narcotic detection. A K9’s reward is praise from his handler, and his special toy. K9 Max loves his fire hose and a Kong filled with peanut butter.

K9 Max was born in France and obeys commands spoken in French. He underwent obedience training while in France before being flown to Ohio to complete training at Storm Dog Tactical. After Max’s initial training, he and his handler, Officer Hunter Schweickart, underwent an additional 6-week-course to become a certified team.

K9 Max weighs about 60 pounds, but still thinks he is a lap dog at home, according to Officer Schweickart.

“There are not a lot of things that he enjoys more than a good ear rub or belly rub,” Officer Schweickart said.

The team is one of three currently serving the City of Hilliard. They join K9 Kane and handler Officer Matt Braden, and K9 Jawaak and Officer Dustin Kaiser.

On average, the K9 unit is used about 200 times per year, mostly for narcotic detection. The unit is often called upon by other law enforcement agencies throughout Ohio for assistance and works closely with Hilliard City Schools in its dedication to keeping the buildings drug-free.

“We’re excited to welcome K9 Max to our family,” said Chief of Police Robert Fisher. “He has a very sociable personality, and we look forward to seeing the impact he’s going to make on the Hilliard community.”