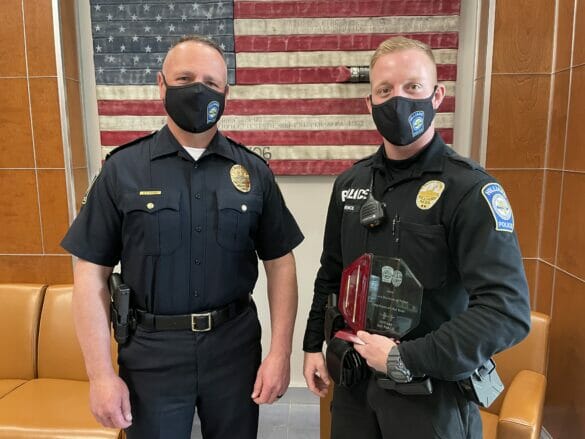 Several Hilliard Division of Police employees were recently recognized for their exceptional efforts serving the City of Hilliard.

Officer Jeb Pencil and Property Custodian Todd Harper were named the 2020 Employees of the Year during the department’s April 21 annual awards ceremony, which was abbreviated and delayed due to pandemic restrictions. They were nominated for the awards by their co-workers.

“Officer Pencil is always ready to help in any aspect of the job and demonstrates the core values of integrity, commitment, cooperation, and professionalism each day,” said Chief of Police Robert Fisher, reading from nominations. “He has a selfless attitude and comes to work every day looking to make a difference.”

Officer Pencil also serves as an instructor in the Division’s Women’s Self Defense program and as a member of the Honor Guard.

Property Custodian Todd Harper, who retired in December 2020 after more than three decades of service to the City of Hilliard, was named the Civilian Employee of the Year.

Harper’s career with the City began as a part-time dispatcher for HPD in 1989. In 1992 he transitioned to full-time and worked in that capacity until the closure of HPD’s communications center in 2013. Harper then took a short assignment at the Municipal Building before returning to HPD as property room manager.

The Division’s third shift team was the recipient of the 2020 Community Service Award for their behind-the-scenes efforts to assist community members with various acts of kindness. Examples include helping a resident paint his home, delivering a mattress to a child in need, and personally purchasing countless hotel rooms, meals, cups of coffee and tow fees during situations in which individuals couldn’t afford to do so themselves.

“These officers do not seek recognition, but they’ve earned it through their deeds,” read the nomination form. “These are the true examples of what service and integrity truly mean.”

Additionally, the Division’s Safe Hilliard Initiative Team was awarded a Distinguished Service citation for improving the quality of life for residents. Detectives seized 3,178-unit doses of acid, had the largest drugs seizures of amphetamine, psilocybin mushroom and marijuana in agency history, and investigated a major fraud case with more than 3,000 victims.

The unit was also instrumental in assisting with a breaking and entering of a local school in which dozens of iPads were stolen, and investigated more than 60 traffic complaints from citizens.

Officers Hunter Schweickart, Andrew Murry and Randall Pugh received the Award of Merit for their actions during a fire at an area apartment complex in December. The officers entered the engulfed homes upon reports of residents trapped inside. All residents were safely evacuated.

“They each exhibited the highest degree of professionalism and commitment to our community by entering a burning building before fire personnel had even arrived and ensuring that each occupant was able to escape to safety,” Chief Fisher said. “It was a selfless act of courage and dedication.”

The event was sponsored by BMW Financial Services.