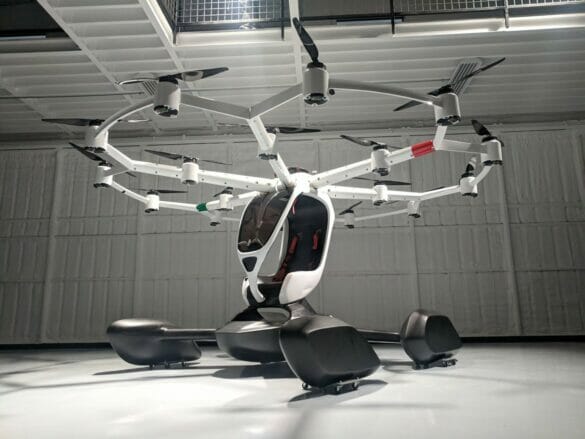 The way first responders answer the call for help across the nation could be transformed with the latest aviation transportation technology, and the innovative research is taking place right in Hilliard.

The City of Hilliard is partnering with Hilliard-based start-up GhostWave, Inc., LIFT Aircraft, and Parallax Advanced Research to study how police officers, firefighters, paramedics and other public safety groups can use drones and ultralight aircraft to respond to emergencies faster and better than ever.

The research is focused on technology known as advanced air mobility (AAM), an industry that is developing ultralight aircraft capable of rapidly accessing areas unreachable by traditional vehicles to transport goods and people.

Specifically, the companies are partnering with the City’s Division of Police to study how HEXA by LIFT Aircraft could be used in public safety scenarios.

LIFT’s HEXA resembles a large drone with 18 sets of propellers, motors, and batteries. It seats one person and weighs only 432 pounds. No pilot’s license or advanced training is required, and the aircraft is cleared to fly over congested areas when operated under public use.

The Detect and Avoid System (DAAS) was developed by Ghostwave Inc., which is headquartered on Lyman Drive in Hilliard, and funded by Parallax Advanced Research’s Ohio Federal Research Network (OFRN) program. The system monitors the locations of multiple drones and aircraft in the air.

Hilliard Deputy Chief of Police Eric Grile said it makes sense for law enforcement and EMS to be working with these industries to explore the evolution of transportation and how it can assist in emergency response.

The Division launched its drone program in 2019 to help in situations where aerial videos can help with emergencies such as finding missing persons, investigating vehicle crashes, accessing fire scenes, and surveying other dangerous locations.

“We already know drones are useful in law enforcement to mitigate emergencies. The HEXA by LIFT Aircraft builds on that by providing the opportunity for a first responder to actually be transported to a scene,” said Chief Grile. “The future of enhancing public safety is happening now, and it’s exciting that the hub of this private-public partnership is in Hilliard.”

An additional local benefit is that the partnership is with Hilliard-based company Ghostwave, a company that has developed a patented system that generates pseudo-random radio frequencies. The system minimizes the chance that other nearby systems are using the same frequencies at the same time. The technology has applications that include automotive and air transportation.

“Technology companies such as Ghostwave are an important and exciting part of the City of Hilliard’s economic development portfolio,” said David Meadows, Director of Economic Development. “We’re always happy when the City can find ways to partner with companies like this, because it shows that Hilliard is an attractive place for entrepreneurs to launch and grow their businesses.”

“Our technology prevents a mid-air collision with closely situated airborne objects, which is vital when it comes to public safety use cases,” said Dean Zody, CEO of GhostWave, Inc. “If we can help first responders safely arrive on scene more quickly, then we will have really done something,”

HEXA was brought to Ohio from Texas for continued research and testing in February 2021 — an effort made possible through partnerships between the U.S. Air Force AFWERX program, the office of Ohio Governor Mike DeWine, and JobsOhio.

“Our initial market, experiential entertainment, has had an incredible response. As we’ve further developed HEXA, we’ve recognized the power of our aircraft to save lives,” said LIFT Aircraft CEO Matt Chasen. “This Ohio collaboration will help make that possible.”

The vision for the research project was pioneered by Parallax Advanced Research and OFRN in 2017. Both entities were behind a $7 million push to expand drone development and advance science and technology research in support of Ohio’s federal and state missions.

“This is what our program has always been about: connecting a network of Ohio innovators at the leading edge of technology to produce revolutionary breakthroughs that transform the way we do business in Ohio,” said OFRN Executive Director Bob Tanner.

A public safety demonstration of this technology is planned for summer 2021 in Hilliard. More details about the event will be released as finalized.