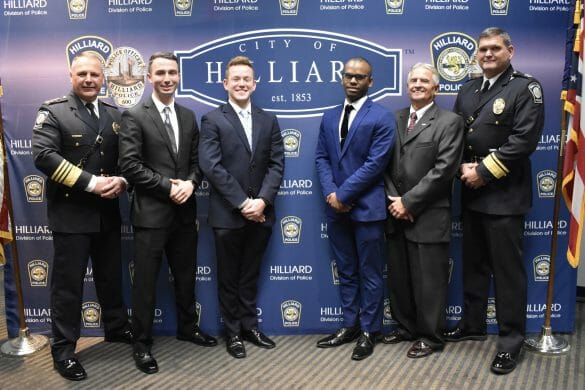 Three new police officers were sworn into the Hilliard Division of Police on Monday.

One by one, the officers raised their hands and recited the oath of office after Mayor Don Schonhardt.

Officers Luke White, Marqel Watkins and Jack Steiner will enroll into the Columbus Police Academy next week, where they will spend the next 28 weeks learning police operations. They are expected to graduate in June.

All three are local to the Columbus area. White, who has been a member of the HPD Explorers Unit for the past four years, is a graduate of Hilliard Darby High School, while Watkins and Steiner are native to the Dublin area.

In front of about 50 family members, friends and new co-workers watching the ceremony, Chief of Police Robert Fisher told the new officers they and their families are now part of the HPD family.

Upon graduation from the academy, they will each have the opportunity to pin on the HPD badge, he said. They should remember to allow each of their decisions to be guided by the Division’s core values: Integrity, Cooperation, Commitment and Professionalism. “We’re excited to welcome these three officers into our HPD family,” said Fisher. “We look forward to our community getting to know them.”