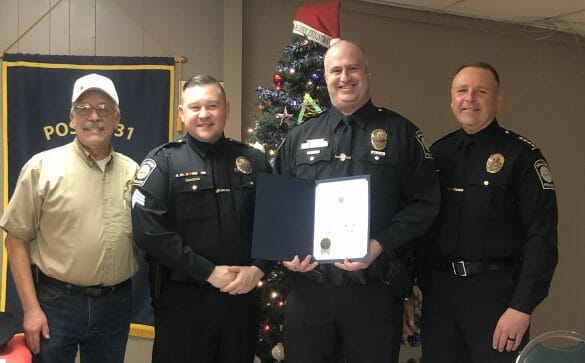 A Hilliard police officer who was deployed to the Middle East for seven months this year with the U.S. Air Force has been recognized for a lifetime of public service.

Officer Josh Barnett was named Officer of the Year by the Hilliard Memorial VFW Post 4931. He was honored during the post’s annual Steak Fry Dinner Dec. 13.

Officer Barnett started his law enforcement career with the Hilliard Division of Police in 2007 and has served the City primarily as a patrol officer. He currently serves as a School Resource Officer at Hilliard Bradley High School.

Barnett joined the Air National Guard in March 2001. After Sept. 11, 2001, he was activated for full-time status for more than three years in support of Operation Global War on Terror and Operation Enduring Freedom. His duties included protecting assets vital to national security in Spain and Washington, D.C., including Air Force One.

In January 2019 he was deployed to the Middle East to help support Joint Task Force-Operations Inherent Resolve, Freedom Sentinel and Deliberate Resolve.

Officer Barnett has earned many awards during his service with Hilliard police, including Letters of Recognition, multiple Achievement Citations, a Commendation Citation, and a Distinguished Service Award. Most notably, he has been recognized for his work leading graffiti clean-up operations in Hilliard.