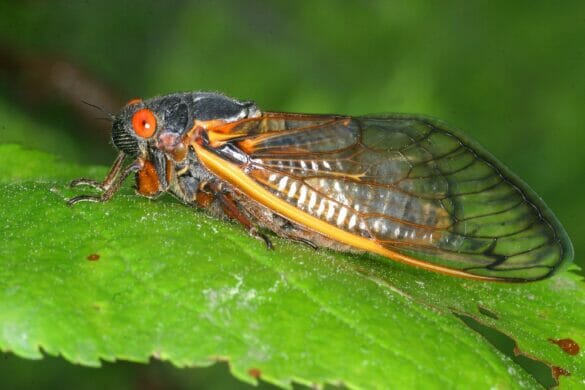 Posted June 4, 2021 in Your Community by Anna Subler

Have you seen the infamous Brood X cicadas in Hilliard?

You may have seen one of two types of cicadas currently living in the City of Hilliard. The greenish black dog day cicadas come out each summer and can be heard in July and August. Their exoskeletons shed and stick on the trunks of trees.

The periodical cicadas, sometimes called the “17-year cicada,” are the “Brood X” cicadas that are all the “buzz” this summer. These insects are black and orange with red eyes and can be found near wooded areas.

According to City Forester Andrew Beare, there are more than a dozen broods of the periodical cicada in the eastern United States on either a 13- or 17-year life cycle, and 2021 happens to be the largest brood of cicadas.

Like the name 17-year cicada entails, they spend 17 years underground as larvae and pupae before emerging as adults.

“They pose no danger to humans, pets, or plant life,” Beare said. “There is no reason to fear the Brood X cicadas.”

However, they are a feast for predators such as songbirds, wild turkeys, opossums, raccoons, turtles and even fish, usually creating a boom in those animal numbers following the Brood X years.

“For brave souls, there are even recipes on Google if you want to try tasting the periodical cicada,” Beare said.

The adult lifespan of a Brood X cicada is only four to six weeks, so central Ohio will start to see their numbers decline as we move closer to July. Then we will have to wait until 2038 for the next Brood X emergence.