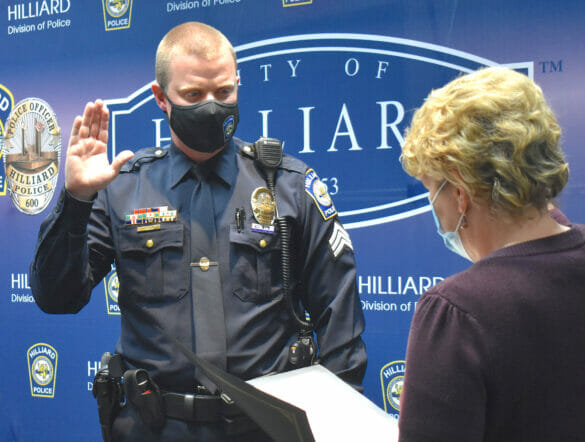 A 13-year member of the Hilliard Division of Police is the Division’s newest sergeant.

Sergeant Chad Wood was sworn into office by City Manager Michelle Crandall on Monday, March 15, after an extensive and competitive interview process.

“Chad has been an informal leader since he joined the HPD family in 2008,” said Chief of Police Robert Fisher. “As a first-line supervisor, a sergeant plays a pivotal role in our organization, and I look forward to him bringing his skills to our leadership team.”

A Columbus native, Wood is a graduate of Ohio Dominican University, where he earned a bachelor’s degree in criminal justice. He attended the Ohio State Highway Patrol’s 121st Basic Police Academy.

Wood joined the Division as a police officer in 2008 and served as a patrol officer, field training officer and officer in charge. He was a member of the Division’s Crisis Intervention Team (CIT), safely de-escalating situations involving those undergoing mental health challenges, and was named Field Operations Employee of the Year in 2014.

Additionally, he has served as an instructor in the Division’s Citizen’s Police Academy program.