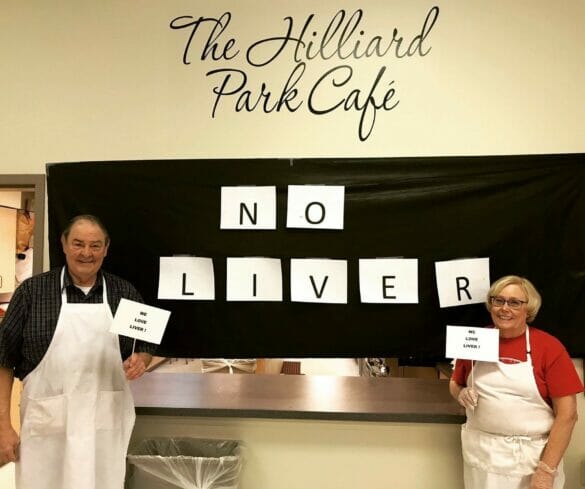 Dick and Barb McKeever are retiring from a job they love.

After nine years of cooking for hundreds of Hilliard senior citizens, the married couple has decided to hang up their aprons.

As cooks at the Hilliard Senior Center, the McKeevers were responsible for planning menus, creating recipes, managing volunteers, and ensuring that everyone who showed up for a senior meal had one.

When asked about their job responsibilities over the years, Barb said, “We’ve really grown into the job and made it our own.”

The McKeevers started as volunteers and transitioned to cooks after four months. Until then, the City was using an outside service to provide lunches for its senior lunch programs.

“When we started, we didn’t plan recipes, and cooking for large groups was hard,” said Barb.

Since they were the first in-house cooks the Senior Center had, there was a learning curve. “We trained ourselves over the years,” said Barb.

“Planning the monthly menus took practice,” said Dick. “We did our best to alternate different foods to make everyone happy.”

Dick and Barb agreed that their favorite memories involved the big holiday lunches. “Everyone was so appreciative on Veteran’s Day and Christmas,” said Barb. “There are many special memories.”

They are also going to miss the people they worked with and served on a regular basis.

“The best part about this job is getting to know all the people,” said Dick. “Everyone helps each other. We’ve seen the employee’s children grow up.”

“Dick and I have made so many friends that will last forever here,” said Barb.

On the other hand, the couple has had to say “goodbye” to many who they considered friends.

“A lot of the people we served and worked with as volunteers were in their 80s or older. It was always tough to lose someone,” said Dick.

Part of their job involved managing the volunteers who helped prep food, set tables and serve meals. “We had some who we could call at any time for help,” said Barb. “This job would have been impossible without them.”

Barb said it was not always easy working together as husband and wife, but it gave them something to connect on at home.

“She has been a saint working with me for nine years,” said Dick.

Former Senior Center Program Coordinator David Judson has worked with Dick and Barb since they started nine years ago and said they both excelled at their job because they loved and cared for everyone.

“Barb would check in on the seniors and volunteers if they were sick,” Judson said.

According to Judson, Dick and Barb also took pride in the food they served.

“They would make things from scratch when there was a pre-made option available,” he said. “Dick and Barb made it our own family restaurant. They knew everyone’s name and what they liked to eat.”

Dick and Barb have three daughters and 11 grandchildren. They said working as cooks at the Senior Center has made hosting family gatherings seem easy. “Our Christmas gathering with over 20 people is a piece of cake,” said Dick. “However, now I cook way too much food when it’s just the two of us.”

Due to COVID-19 restrictions, the couple had to delay their retirement travel plans. “We love cruises and hope to go on one when it’s safer,” said Dick.

In the meantime, they plan to slow down and enjoy life.

The couple says in the future, they hope to enjoy all the activities the Senior Center has to offer, including trips and volunteer opportunities.

“Just because we will not be cooking, doesn’t mean we won’t be back,” said Barb. “It’s time to pass the torch.”