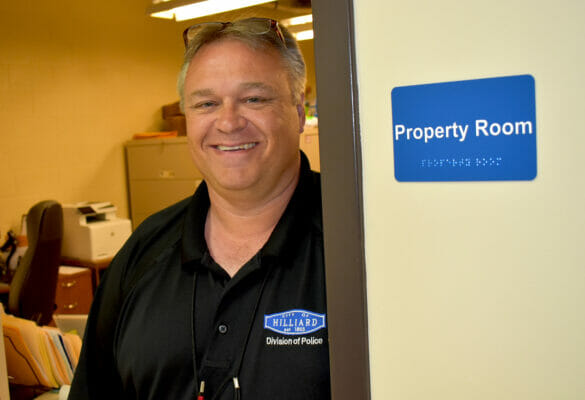 Property Room an Unseen but Crucial Role at HPD

When someone asks Todd Harper what he does for a living, he gives an abbreviated and generic response: tracking any property brought into the police station by officers.

But his job as property custodian for the Hilliard Division of Police is so much more complex, interesting and — frankly — bizarre than that. Harper is the gatekeeper of 7,000 or so items meticulously stored in a quiet and secure 1,200-square-foot corner of the station’s basement. Most of the property is crime scene evidence, while other items have been turned in for safekeeping or brought in as “found property” and never picked up.

Harper ensures each item is properly catalogued and preserved while overseeing the never-ending purging process of making room for new items.

Drugs and other illegal items are destroyed. Property in closed investigations can be returned to the owner or — if left unclaimed for more than 30 days — auctioned as government surplus. But even after an item has left the room, it is never forgotten. Handwritten logs recording a history of stored property dating back to the 1960s are stored on one of Harper’s many well-organized shelves.

“You have to be a multi-tasker,” said Harper, who has been in the position since 2014 after serving as an HPD dispatcher for 24 years. You also have to be an independent worker and have a nose that can stand the constant and overwhelming smells of lawn bags full of marijuana. And you must be extremely trustworthy, as part of the job includes transporting evidence to and from the Ohio Bureau of Criminal Investigation lab in London for testing.

Some of the items that remain tell harrowing stories. There are several boxes of blood-stained clothing from a solved murder case, a 7-iron golf club used in a felonious assault, packages tagged “Caution Fentanyl,” as well as a hammer and half-smoked cigarette collected as evidence in
a burglary.

Some of the more random items include a pizza box label and teeth whitening kits kept for theft investigations, a “Scream” Halloween mask, a cup of stale beer from a drunk driving case, and even one small bag labeled “half of an orange pill” seized during a drug investigation.

Drugs, cash, and guns are stored in a separately locked “cage.” To make room for new items, guns are taken to a scrap metal facility to be chopped up, while bulk amounts of marijuana are burned at an equine cremation facility. Pills are burned in a barrel, while needles are delivered to the Norwich Township Fire Department for safe disposal.

A large portion of the stored items are paperwork, such as bank statements and checks involved in fraud cases, as well as cell phones, computers, and other electronics. Vehicles, bicycles, and other bulk items are kept securely off-site, while hazardous materials, including vape pens and fireworks, are stored separately for safety.

Harper also oversees the department’s Drug Take Back Box, which is available for residential use in the HPD lobby. Each year, the box collects about 350 pounds of unwanted prescription pills from the public.

Perhaps the most important part of the job is documenting the chain of custody. Harper says he can tell exactly who has been in contact with any item and when. Those details are crucial should the integrity of a piece of evidence be called into question during court.

For that reason, officers submit their items through a secure locker process when Harper isn’t in the office. Some could argue he has the most important, but least known, job
at HPD.

“It’s a room you don’t want multiple people to have access to,” he said. “Not even the chief of police has a key.”

Detective Sgt. Suzanne Muraco, who serves as Harper’s supervisor, said the agency is grateful for his expertise. Other police agencies contact him for advice, she said.

“He works hard, keeps great records and is motivated to keep the property room running smoothly,” Muraco said. “Todd is our best-kept secret.”