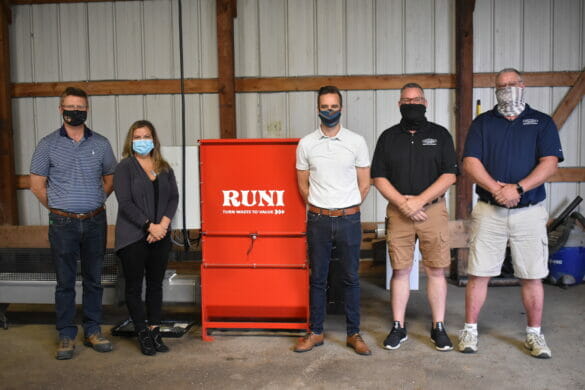 Each year thousands of tons of Styrofoam are thrown away, taking up valuable space in landfills. That’s why some community leaders have come together to launch a Styrofoam recycling program that’s capable of shrinking a stack of Styrofoam the size of an SUV down to the size of a concrete block.

With the help of a grant funded by Solid Waste Authority of Central Ohio (SWACO), members of Hilliard’s Environmental Sustainability Commission (ESC) have partnered with the City’s Operations Division to purchase central Ohio’s first Styrofoam densifier.

The new machine allows residents of Hilliard and nearby communities to recycle extruded polystyrene – the rigid Styrofoam found largely in electronics and appliance packaging – to help divert waste from landfills.

Since polystyrene is not an accepted recyclable material in Franklin County, it oftentimes ends up in the landfill. In 2019, SWACO reported 6,882 tons of Styrofoam were in its landfill.

“This new machine will keep some of that foam out of curbside waste bins and dumpsters, which will extend the life of the landfill,” said ESC Chair Kristen Hosni.

The densifier, located just outside the Hilliard Municipal Building and operated by City staff, compacts large blocks of polystyrene into dense bricks.

According to Parks employee Geoff Dew, the machine shreds the Styrofoam and then compresses out air to make blocks of densified foam. The process reduces the volume of the foam by 1/50th of its original volume, allowing it to be used for things like insulation and picture frames.

“It’s exciting that we have the only community densifier in Central Ohio,” Dew said.

“Over time we hope to increase the number of collections, as well as form strong partnerships with surrounding communities,“ Hosni said. “This project presents a unique opportunity to expand foam recycling services for not only residents of Hilliard, but also other areas of Central Ohio.”

The densifier cost the City about $30,000, with the entire amount covered by SWACO. Additional startup costs were paid for by the City ($16,000).

Styrofoam drop-off events are expected to begin this fall and will be posted on the City’s website and social media pages.