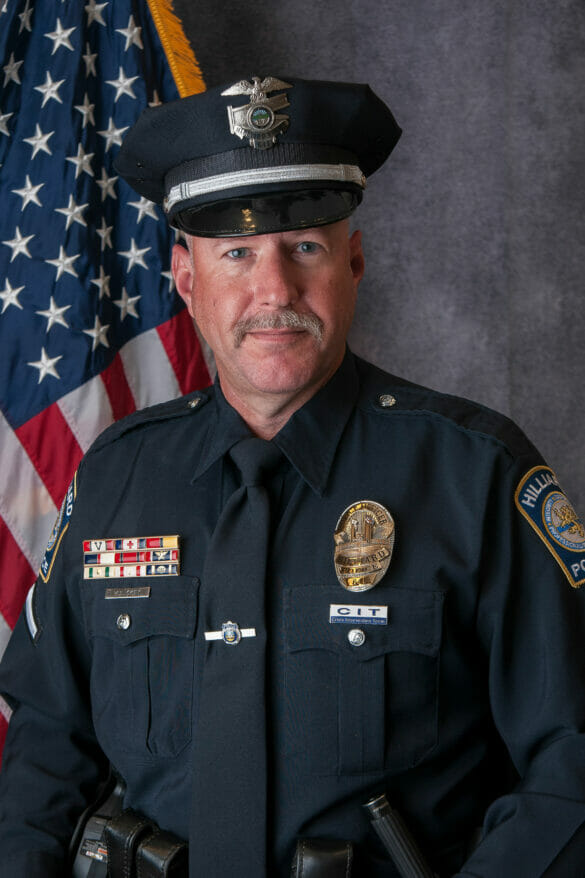 He has not only served the City of Hilliard as a police officer, but his entire country as a U.S. Marine.

Officer William “Bill” Okey was recognized for a lifetime of public service recently as the Hilliard Memorial VFW Post 4931 named him the post’s Officer of the Year.

An 18-year veteran of the Hilliard Division of Police, Officer Okey was honored during the VFW’s annual Steak Fry Dinner on Friday, Jan. 11. VFW Commander Marty Sutton presented the award.

“As a lifetime public servant, Officer Okey is very deserving of this recognition,” said Chief of Police Robert Fisher. “I’m happy to see him honored and appreciate the VFW presenting this award.”

Originally from Marietta, Ohio, Officer Okey enlisted in the Marines in June 1989 and completed boot camp at Parris Island. He was initially an infantry rifleman before completing Surveillance & Target Acquisition Platoon training.

In 1992, Officer Okey completed Scout Sniper training and received the High Shooter Award for his class. He served the remainder of his enlistment as a sniper.

During his military career, Officer Okey saw combat in Liberia and in Iraq during Operations Desert Shield and Desert Storm. He earned the Southwest Asia medal with one-star, the Joint Meritorious Unit Citation and the Sea Service Deployment medal.

Officer Okey started his law enforcement career with the Hilliard Division of Police in 2001, and has served the city primarily as a patrol officer. He recently transitioned to the position of School Resource Officer and spends his days in various middle schools within the Hilliard City School District.

Officer Okey has earned many awards during his service with Hilliard police, including Letters of Recognition, multiple Commendation Citations, several Achievement Citations, the Distinguished Service Award, a Life Saving Award and the Award of Valor.

Most notably, he earned the Distinguished Service Award for assisting another officer with wrestling a gun away from a suicidal subject and safely taking the subject into custody for medical care.

Officer Okey has been a life member of the VFW since 1997.